Ugandan farmers who could switch up their herd to European exotic cattle breeds could viably increase their income ten-fold. This is because exotic cows on average, produce 10-30 times more milk than indigenous Ugandan ones. Yet nine out of ten (93%) cattle herds reared for milk production in Uganda are native cattle breeds. The low uptake of exotic cows is keeping the sector underdeveloped and underutilised. Some of the major reasons given by many farmers for their reluctance to switch to exotic cows is their higher maintenance cost especially via feeding, and their vulnerability to the fatal East Coast Fever. It kills over 1million cattle annually in Africa—that's one cow every 30 seconds. It is especially deadly to untreated non-native cattle and their crossbreeds. However, Ugandan cows could soon be made immune to East Coast Fever and other prevalent tickborne pathogenic diseases, potentially transforming Uganda’s livestock sector, optimising the efficiency of milk and meat production from livestock in the country.

Cattle have long been considered a measure of wealth across Africa. It is estimated that more than 70% of households in Uganda keep at least one kind of livestock including poultry, cattle, pigs and other animal types. For millions of Ugandans, owning cattle has remained a symbol of wealth and power. 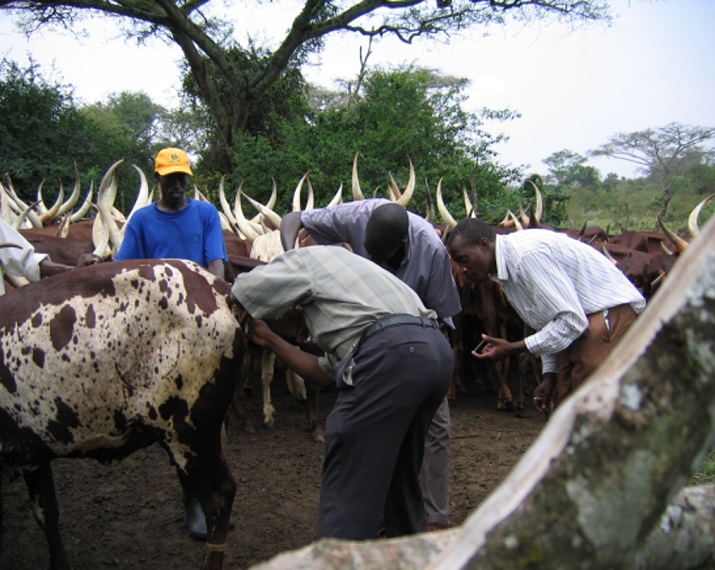 While the majority of livestock production in the country is still done on a small scale, it has remained the backbone of income generation and primary economic asset for close to three quarters of Ugandan households.

Notwithstanding its smallholder nature, the livestock production sector in Uganda contributed around 13% to GDP in 2020-2021. Of this, the diary sector contributed about 50% of the livestock-related GDP (composed of mainly cattle, pigs, goats, sheep and poultry), making it the most important livestock sub-sector.

In fact, Uganda generated more than 750billion shillings in diary exports in 2021, making the diary sector officially the second highest export earner in the agricultural sector, after coffee. In other words, cows are becoming so lucrative they may replace coffee very soon in the agriculture export value chain.

What’s more, this economic feat has been achieved at about 20% of the full potential capacity of the sector for a number of reasons.

Firstly, Uganda produces over 2.5billion litres of milk annually (based on estimates for the last 5years), but only 20% of the milk produced is sold for processing. The rest of the 80% is sold on the informal market as raw chilled milk or raw warm milk to consumers, leaving an immensely vast untapped market for value addition.

Secondly, while annual milk production has increased from 2.08billion litres in 2015 to 2.81billion in 2021, this represents only about 10% of the country’s full milk production potential. This is partly because nine out of ten (93%) cattle herds reared for milk production in Uganda are native cattle breeds and these are known to produce up to 30 times less milk than exotic counterparts.

But many farmers in Uganda remain uneasy about switching to exotic cows like the Friesian, Ayrshire, Jersey and Guernsey breeds including their cross-breeds, not only due to their higher maintenance cost especially when it comes to feeding, but also their intolerance to tick-borne diseases especially the fatal EastCoastFever (ECF).

But if well fed and managed, exotic cows, on average, produce 10-30 times more milk than indigenous Ugandan ones. In comparison, indigenous cows like Nganda, Zebu, Sanga (Ankole) and Boran produce about 1-4 litres of milk a day. That’s 30times less milk than their exotic counterparts.  So, a Ugandan farmer who could switch up their herd to European breeds could viably increase their income ten-fold at the very least.

While some Ankole breeds such as those on President Museveni’s kisozi/Rwakitura farm, can reportedly match the milk and meat productivity of exotic Friesians, on the whole, this is rarely the norm across Uganda.

Even when it comes to selling, an exotic breed bull and its cross-breeds can fetch double the price of its native counterpart. Exotic cows also grow faster, taking anywhere between 16 to 18 months to conceive, compared to local cows which can take anything up to 3-4 years before conceiving.

Despite their higher resistance threshold to tickborne diseases such as EastCoastFever, local cows are not as commercially productive as non-native cows. And with 93% of Uganda’s more than 14.6 million cattle population still composed of indigenous cows that possess such poor productivity, it means the country is underutilising both its income and milk production full potential.

This is why government has for long advised farmers to change from the old practice of keeping indigenous cows and switch to cross-breeds or exotic breeds like Friesians, Jersey, Guernsey and Ayrshire with higher income and milk productivity.

Unfortunately, it is still a very common practice for farmers in Uganda to keep big herds of indigenous breeds of cattle like Nganda, Zebu, Sanga (Ankole) and Boran for milk and beef despite their little milk or beef production capacity compared to the cost and time that is spent to manage them. This low uptake of exotic cows is keeping the sector underdeveloped and underutilised.

Some of the major reasons given by many farmers for their reluctance to switch to exotic cows is their higher maintenance cost primarily feeding, and their vulnerability to tick-borne diseases especially the fatal East Coast Fever.

And EastCoastFever is indeed a big problem. It kills over 1million cattle annually in Africa—that's one cow every 30 seconds. Found mostly in Africa, ECF kills infected cattle within a matter of weeks. It is especially deadly to untreated exotic cattle, where mortality rate can be 100%. It is also the leading killer of local calves in Uganda.

A disease that practically kills off all infected untreated herds of non-native cattle and their crossbreeds, is bound to be a major issue in any country where livestock still supports the economy, on top of being a major source of food security, and household nutrition.

While many farmers resorted to spraying cattle with acaricides to try and control tick vectors, this has also led to an endemic rise in acaricide resistant ticks due to over spraying, acaricide admixing, and use of unregistered acaricides as well as fake agro-chemicals smuggled into the country.
However, Ugandan cows could soon be made immune to EastCoastFever and other prevalent tickborne pathogenic diseases.

Fighting back against tick-borne diseases

Researchers from Makerere University are now working on a cheaper, safer, and more accessible vaccine solution that kills some of the most prevalent tick vectors in Uganda, including the R. appendiculatus ticks responsible for transmitting EastCoastFever (ECF).

TicVac-U, the new anti-tick vaccine currently undergoing field trials as part of the last stage of commercialization, is anticipated to play a critical role in protecting immunized cattle in Uganda against ticks and tickborne diseases such as East Coast Fever, Babesiosis and Anaplasmosis.

The tickvaccine was developed by Prof. Dr Margaret Saimo Kahwa, the main Principal Investigator, in collaboration with scientists from MAK-COVAB and is the culmination of the Antitick Vaccine Development Initiative supported by H.E. Gen Yoweri Museveni.

Upon commercial production in 2022, the new tickvaccine is expected to be rolled out on a mass vaccination exercise covering the entire country. More importantly, the introduction of a vaccine for EastCoastFever will remove constraints around farmers switching to cross-breeds or exotic breeds like Friesians, out of fear of their vulnerability to EastCoastFever disease.

A vaccine for EastCoastFever vaccine will thus directly affect cattle health and productivity level and by extension increase the quantity and quality of milk being produced locally, turning Uganda’s cows into healthy and highly lucrative cash cows.

With nine out of ten (93%) cattle herds reared for milk production in Uganda being native cattle breeds, Ugandan farmers who supplement dipping their cows and vaccination with TicVac-U, will be able to switch up their herd to exotic breeds and viably increase their income ten-fold as well as milk output.

At the moment, Uganda’s livestock value chain remains underdeveloped and underutilized with little value addition to both the milk and meat sector due to many challenges. Upto 80% of milk produced in Uganda remains unprocessed. Nine out of ten (93%) cattle herds reared for milk production are native/indigenous cows that possess poor milk output. Tickborne diseases like EastCoastFever and Babesiosis further continue to decimate exotic cow breeds and their cross-breeds, which are more economically productive than their native counterparts.

Despite these challenges, the country’s diary sector has managed to become the second biggest export earner, behind only coffee. The invention of TicVac-U tickvaccine will, going forward, play a very critical role in keeping livestock healthy, providing farmers ways to increase productivity, prevent diseases and optimise the efficiency of milk and meat production from their livestock.