Uganda loses more than US$1.1billion annually due to ticks and tick-borne diseases. East Coast Fever (ECF) alone kills approximately 30% of the annual calf-crop of Uganda’s indigenous cattle. Worse, it practically kills all infected untreated herds of exotic cattle and their crossbreeds in Uganda, leading to very high morbidity and mortality, particularly among exotic breeds, cross-breeds and even increasingly on local breeds raised in a tick-free environment. 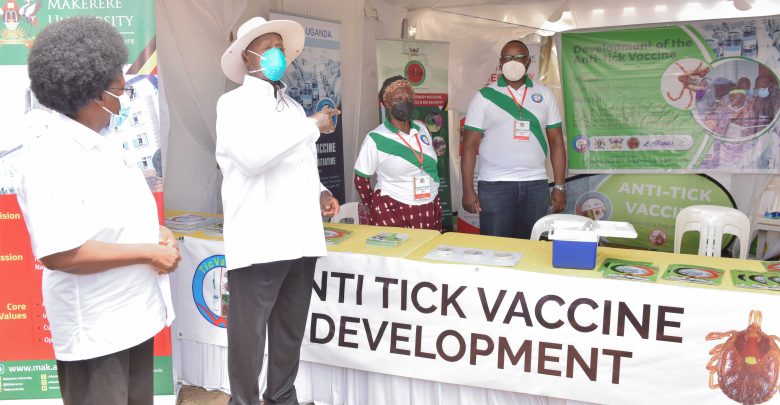 An even bigger issue facing the country for the last 6 years is that ticks in the country are no longer responding to drugs (acaricides) designed to kill them.

Unfortunately, there has been a growing and fast spreading tick resistance to acaricides among cattle herds in Uganda, a that problem the National Drug Authority has rated as an epidemic. Ticks have developed super resistance to virtually all of the available 21 acaricides in Uganda, making the development of an anti-tick vaccine a national policy prerogative.

Ticks and tick-borne diseases are responsible for acute significant economic losses to Ugandan farmers through debility, direct mortality, morbidity, loss of milk, and control costs in purchase of acaricides, chemotherapy and vaccination.

Some of the economic losses caused by ticks and tick-borne diseases in Uganda are broken down as follows;
• Calf mortality (30% of the calf crop in Uganda currently die)
• Loss in milk (US$187million)
• Loss in meat production (US$472 million)
• Blood loss (US$26 million)
• Farm disease prevention and control, as well as farm input costs
• Uganda also losses an annual forex outflow worth over US$83.3million in imports of 378,000 litres of acaricides and 83,000 litres of associated drugs, causing more economic loss to the country.

An even bigger issue facing the country for the last 6 years is that ticks in the country are no longer responding to drugs (acaricides) designed to kill them. Unfortunately, there has been a growing and fast spreading tick resistance to acaricides among cattle herds in Uganda, a that problem the National Drug Authority has rated as an epidemic. It is a potent issue that is also continually preventing local communities and the country from attaining optimal production and productivity essential for socio-economic transformation through the country’s Animal Resources-based Industry (ARI).

According to data from the National Drug Authority, ticks have developed super resistance to virtually all of the available 21 acaricides in Uganda (including amidines, pyrethroids, Organosphates and their combinations), a problem that is most prominent across most farms in Western and Central Uganda cattle corridor districts.

Moreover, the coping methods adopted by Ugandan farmers experiencing acaricide failure, such as increasing acaricide concentration, applying acaricides more frequently and admixing acaricides, has only further accelerated tick resistance to them, depleting farmer incomes and reinforcing poverty in the country.

The National Drug Authority estimates that the situation with tick resistance to acaricides is being exacerbated by use of unregistered acaricides and agro-chemicals that are smuggled into the country from neighbouring nations like Rwanda.

This is why the development of TicVac-U, Uganda’s first anti-tick vaccine has been strongly supported by many stakeholders, including HE the President of Uganda, Gen. Yoweri K. Museveni as well as industry policy makers and national institutions including the National Drug Authority (NDA), Makerere University, and COVAB.

Tick resistance to acaricides remains the most pressing issues for the TicVac-U ™ vaccination uptake program, which aims to educate Ugandans to immunize not just their exotic cattle breeds and crossbreeds, (which are preferred for improvement of dairy production especially in southwestern and central Uganda) but also local breeds raised in tick free environments which now need immunization.

TicVac-U is an effective, affordable and safe anti-tick vaccine that will reduce acaricide use, and protect Uganda’s cattle from not just tick-borne diseases but also the risk of acaricide resistant ticks.

Its effectiveness has already been demonstrated during ongoing trials involving 100 heads of cattle, at the 300-acre livestock farm in Ngoma specifically developed to test the vaccine's efficacy and effectiveness.

In the most recent clinical trials against the two most common Tick-Borne Diseases in Uganda (East Coast Fever (ECF) and Babesiosis), overall efficacy of TicVac-U vaccine candidate proteins for the R. appendiculatus vector- the brown ear adult ticks responsible for transmitting East Coast Fever (ECF), was 86%. For R. decoloratus which is the most common tick species that transmit the Babesiosis TBD in Uganda, TicVac-U efficacy was 53%.