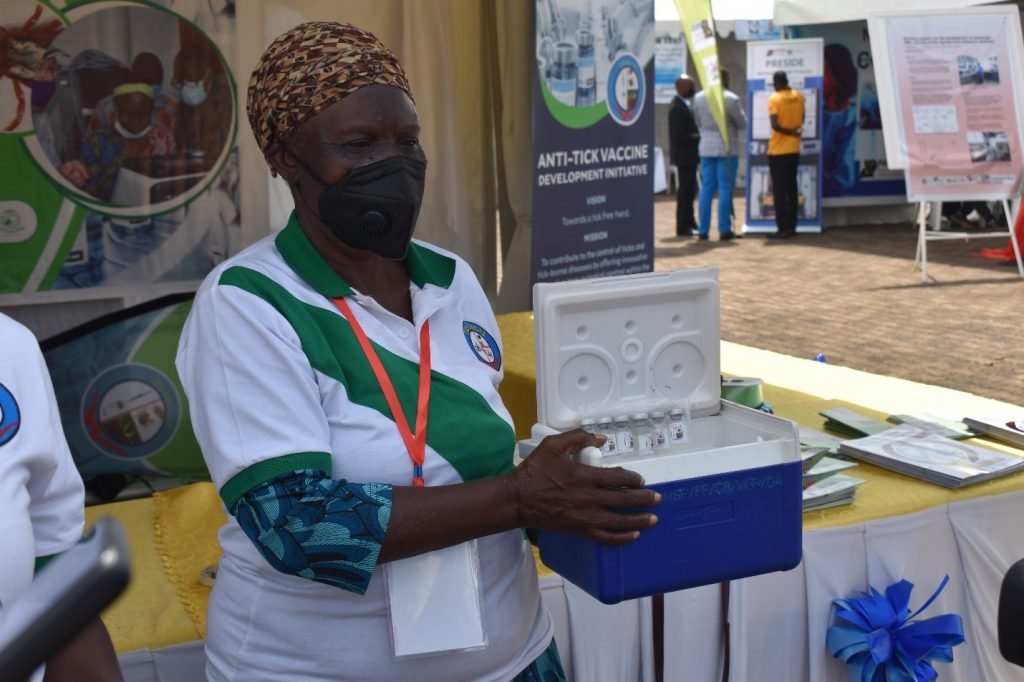 Dr. Margaret Saimo-Kahwa holding a batch of TicVac-U vaccine proteins at an exhibition

In fact, ticks are so ubiquitous in terms of broad distribution across the world that they rank second only to mosquitoes as vectors of disease.

The hard-bodied Ixodidae tick family which includes the cattle tick, Rhipicephalus microplus, is registered to cause the greatest economic impact to livestock in Africa, a factor arising of its broad distribution, vector capacity, blood-sucking habits and the proportion of cattle that it affects.

In Uganda alone, ticks and tickborne diseases cause gross financial losses totalling approximately US$1.1billion annually, losses that are expressed in loss of milk and meat production, calf mortality, farm diseases prevention and control. Uganda losses an annual forex outflow worth over US$83.3million, due to expenditure on the importation of approximately 378,000 litres of acaricides and 83,000 litres of associated drugs on an annual basis.

National policy makers such as the National Drug Authority (NDA) as well as other government institutions have for long expressed that this type of economic loss is unsustainable in the longterm since it deprives local communities and the country from attaining optimal production and productivity of the livestock sector.

While livestock is critically vital for socio-economic transformation through the country’s animal resources-based industry (ARI), for many pastoralists and small-scale farmers, the loss of even one cow can be disastrous.

Livestock farmers in Uganda have for a long time relied mostly on spraying cattle with acaricides to try and control ticks but without a national tick-control policy, it has unfortunately led to over spraying and the rise of acaricide resistant ticks as well as the occurrence of environmental and food contamination in form of acaricide-contaminated animal products.

According to data from the National Drug Authority, ticks have so far developed super resistance to virtually all of the available 21 acaricides in Uganda (including amidines, pyrethroids, Organosphates and their combinations), a problem that is most prominent across most farms in Western and Central Uganda cattle corridor districts.

Moreover, the coping methods adopted by many Ugandan farmers experiencing acaricide failure, has been to increase acaricide concentration, applying acaricides more frequently and admixing acaricides, which has only further accelerated tick resistance to them.

The NDA estimates that the situation with tick resistance to acaricides in Uganda has been exacerbated by use of unregistered acaricides and agro-chemicals that are smuggled into the country from neighbouring countries.

It is against this background that renown Makerere University professor, Dr. Margaret Saimo-Kahwa spearheaded an initiative to research, develop and produce an anti-vaccine.

Dr. Saimo-Kahwa first began research on an antitick vaccine as far back as 2005 when she was working on her PHD thesis focussed on the use of RA92A recombinant protein from Rhipicephalus appendiculatus ticks as immunogen to protect cattle against the tick challenge.

Dr. Saimo-Kahwa’s work has since majored in the vaccine potential for tick antigens in the control of ticks and tickborne diseases, where she has become the foremost expert, and often invited to speak at annual Conferences on Vaccine Research globally.

In 2014, Dr. Saimo-Kahwa co-authored a scientific paper funded by Embrapa, Makerere University and other organizations.

In 2017, she presented research on the vaccine potential for tick antigens to H.E the President of the Government of Uganda, Gen. Yoweri Kaguta Museveni, who took a very keen interest in the possibility of developing a local anti-tick vaccine.

The president subsequently pledged financial support for this initiative, including awarding more than 100 heads of cattle from his own personal stock to aid Dr. Saimo-Kahwa in undertaking vaccine trials. He further availed land for a 300-acre livestock farm in Ngoma, Nakaseke on which clinical trials as well as further research and development could take place until commercial production of the anti-tick vaccine could commence.

As a result, Dr. Saimo-Kahwa and her team of scientists in COVAB have continued to refine the vaccine technology to the point where it has been deemed safe and effective by the NDA so it can be developed and distributeed on a commercial basis to farmers beginning 2022.

Successful trials of the anti-tick vaccine from field trials in Ngoma indicate that the overall efficacy of the serum in stopping tick infestation is 86 percent for Rhipicephalus appendiculatus, the brown ear tick that transmits East Coast Fever (ECF) and 53 percent for Rhipicephalus decoloratus – the tick species that transmits Babesiosis (Omusito).

The fact that TicVac-U efficacy in stopping tick infestation is 86 percent for R. appendiculatus, the brown ear tick that is notorious for transmiting EastCoastFever (ECF), is a testament to the achievement of Dr Margaret Saimo-Kahwa and her team of COVAB scientists.

EastCoastFever (ECF) is one of the deadliest diseases in Africa, killing more than 1million cattle annually in the cattle populations of Africa. Its been called the malaria of cattle and with 2,740 deaths a day, its easy to see why.

EastCoastFever is still prevalent across the eastern, central, and southern parts of Africa, and has been reported in 11 countries in the region: Kenya, Tanzania, Uganda, Burundi, Rwanda, Democratic Republic of Congo (DRC), Malawi, Mozambique, South Sudan, Zimbabwe, and Zambia.

ECF mortality can be up to 100%, with infected cattle dying within 3 weeks after the initial attachment of infected ticks, because the incubation required can be just 10days, as the ECF tick parasite spreads quickly due to its aggressive nature. In Uganda, the most vulnerable cattle breeds are the exotic imported breeds which are not as resistant to EastCoastFever as local breeds, although this is changing due to cross-breeding that’s diluting indigenous breeds and reducing their resistance to this disease.

While vaccines such as Malawi’s ECF-ITM vaccine (Muguga Cocktail) have been trialled in Uganda in the past, the performance of Muguga Cocktail in particular has been hampered by both its exorbitant cost (the vaccine costs US$6-10 per dose). On the other hand, upon successful production starting in 2022, the TicVac-U anti-tick vaccine will be sold at around US$1.42 per dose or approximately UGX5,000. This is 10times lower than Muguga Cocktail or what other manufacturers charge for similar tick-control products.

The Malawian vaccine has also further been rendered ineffective in Uganda by the rise of ticks that are resistant to acaricide dipping and spraying.

The urgent need for a cost effective and longterm method of immunization of cattle in Uganda against eastcoastfever thus necessitated the research, development and production of a local tickvaccine that could protect cattle against East Coast fever arising from the new tide of acaricide resistant ticks.

With the production of the TicVac-U antitick vaccine commencing in 2022, Ugandan cattle keepers will be able to vaccinate their cattle against East Coast Fever very cheaply, without the need to spray or dip them since the tickvaccine will help them acquire natural immune resistance to these vector ticks.

We talked to Dr. Saimo-Kahwa to explain, firstly how TicVac-U is made and secondly, how it works:

“TicVac is made from recombinant Ra86 variant proteins which we extracted from two of the most common tick species in Africa –R. appendiculatus (Engoha). This is the brown ear tick that transmits East Coast Fever," Said Dr. Saimo-Kahwa.

"We also used the R. decoloratus – this is the tick species that causes Babesiosis (Omusito). Once we extracted the recombinant Ra86 variant proteins from these two tick species, we were then able to formulate them into a candidate anti-tick vaccine, which you know as TicVac-U™.

We know that vaccines work in two ways to stimulate an immune response upon vaccination. We asked Dr. Margaret Saimo-Kahwa to explain how her vaccine works against ticks and tickborne diseases such as EastCoastFever and others.

"The way the candidate vaccine works is that cattle immunized with TicVac-U produce antibodies and an immune response which kills ticks. In short, when local ticks that cause tickborne diseases such as EastCoastFever, Babesiosis or Anaplasmosis, feed on cattle that have been immunized with our tickvaccine, these ticks can neither hatch eggs successfully or feed on the cattle without dying”. "And if the ticks are dying , there is no disease vector to sicken the cattle. Its really that simple.

"We have been carrying out clinical trials in the field for much of 2021 and 2022, and results now show that cattle immunized with TicVac-U produce antibodies and an immune response which kills many of these ticks," Dr. Saimo-Kahwa concludes.

Dr. Saimo-Kahwa further continues to elaborate on the innovativeness of TicVac-U and how it induces a cow’s own natural immune response, in form of antibodies which bind to ticks’ guts and other internal organs, essentially killing off the ticks that ingest the cow’s antibodies. This is also what makes TicVac-U extremely safe for both cattle and human consumption of milk or meat from vaccinated cattle. The ticks are killed organically by a cow's natural defences, rather than harmful chemicals like acaricides.

Production of the tickvaccine is expected to commence in 2022 after the TicVac team signed a production agreement with Alfasan Uganda Limited in March 2021 to manufacture the vaccine in compliance with current Good Manufacturing Practice (c-GMP) standards as stipulated by the NDA’s veterinary drug regulation division.

If the infrastructure of the vaccine production and distribution is heightened over the next few years, large EastCoastFever endemic areas across Uganda as well as the rest of the eastern, central, and southern parts of Africa, will be expected to be endemically stable and the disease controlled.